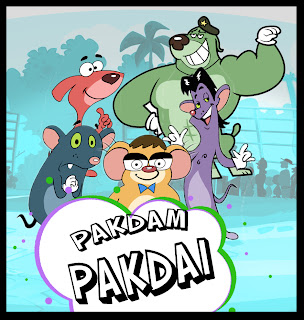 Hi,
A new TV series "Pakdam Pakdai" has started on Nick India Mon to Fri 6.30 pm since 8th of April 2013. I would request you to watch the same as it has a big IDC hand in it.
At Animagic we did the preproduction for 7 and 1/3 of the 25 episodes of the first season and Animagic is the brainchild of Sumant, Gayatri (both IDC Alumni) and Chetan.
Initially when I joined this project I thought it was going to be on the same lines as that of "Tripura-The Three Cities of Maya" (Pl see http://www.youtube.com/watch?v=0gIQboCvHyc)  with Chetan doing the storyboards and me doing the animatics. However midway Chetan took a big risky decision and gave the team the responsibility of the project. This move gave me a mini heart attack then but looking at it now I see how much I have learned by Chetan being absent from the decision making process. I (Shaunak Samvatsar) was the only person with exp on the team and the rest were more or less freshers only and so was running the team and was mainly responsible for the Storyboards and finals of the Animatics. I was full time on this project only. It was an unique exp interacting on skype with a director who was based in another city and executing his vision of the series. I had a lot of creative freedom which I exercised with caution otherwise it would eat into the production schedule. At starting we did only 7 min of animatics in a month and by the end of the project we were approx able to execute 42 min of animatics in a month.
In the initial phase of the project Deepa Chordia of IDC did the visual styling.
Rohan Deshchougale was the lead on Episode specific characters and layouts. Mitali Choudhari and Anshita Agarwal did the animatics, props and helped in production planning. All of these are from Symbiosis Institute of Design. The rest of the team consisted of Suhas Koli, Priyanka Rewale, Sania, Ankit, Mahesh and Santosh who were the animatics and BG team. A special mention to our Project Manager Shital Suryavanshi who was able to incorporate into herself into the creative process without becoming a "Management Bother"
We have put in a whole lot of effort into our episodes which is why a team of mainly freshers were able to accomplish what a lot of establish studios were unable to. We have missed sleep, family functions and have many a times lost our heads while maintaining the delivery schedules. The series is fun and quite well executed and I really hope you spare some time to watch the same everyday.